In this section we will look at some of the more common nautical terms used on a boat. Boating has a vocabulary all of its own and can seem a little daunting at first, but it is essential that you build your sailing vocabulary and start talking like a pirate

English and Scots have thousands of nautical terms and phrases adopted into common use. However,  the purpose of this section is to lay the groundwork and provide a foundation to some basic terminology which we build upon throughout the course.

Clear and precise communication between the skipper and crew on every vessel is essential to avoid any confusion and avoid the potential for hazardous situations to arise. 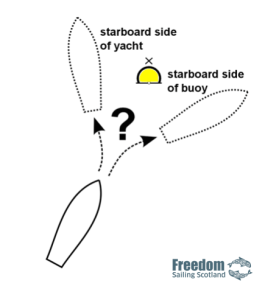 Port, starboard, ahead and astern 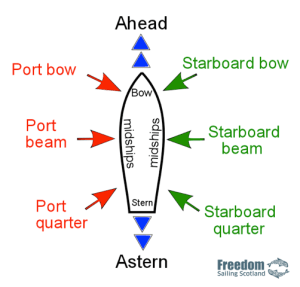 In the beginning most people have difficulty remembering which is Port and Starboard and this can cause embarrassing navigational mistakes. Just remember when standing on a vessel looking AHEAD that the PORT side of the yacht is located towards your left hand and the STARBOARD side is on your right hand.

There are a number of way we can remember which is port and starboard.

Ahead and Astern are used to describe direction. A boat can be be moving AHEAD and making WAY through the water or it could be moving ASTERN with the engine engaged in reverse. Other vessels or objects can be AHEAD of us or we could be passing ASTERN of another vessel. 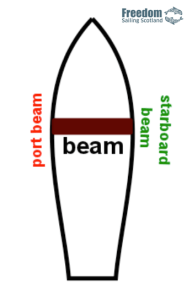 The BEAM of a vessel is traditionally where the largest deck beam extended across the widest point of the ship from one side of the hull to the other. In a sailing yacht it’s usually in the vicinity of the mast. In speedboats the beamiest point is usually near the stern. You will often hear the term MIDSHIPS being used which refers to the middle of the boat.

A Boat’s QUARTERS are located ABAFT (behind) the ‘Beam’ and ‘Forward’ of the ‘Stern’ on either side of the vessel. If someone mentions the STARBOARD or PORT BOW they are describing a position just behind or astern of the Bow on the Starboard or Port side of the vessel.

Direction from the vessel 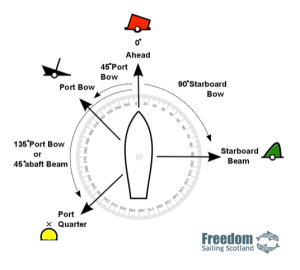 When a crewman calls-out that he can see a “shipwreck 45 degrees off the port bow” this describes a relative position or bearing from the bow and centreline of the vessel. Basically the wreck would be located halfway between the bow and the beam on the port side in the area of the port bow.

The illustration shows that ‘starboard 90 degrees’ is the same position as the starboard beam. When giving a position from the boat, you can identify it by reference to parts of the boat, like Bow, Beam, Quarter, Astern and whether it is on the Port or Starboard side. You could also identify the position by giving the relative angle in degrees from the bow.

It’s very useful to describe the direction of the wind and how it is hitting a boat. The WINDWARD side of the boat is the side closest to the wind and towards the wind and weather.  The LEEWARD (pronounced loo-ard) side is that furthest from the weather towards where the wind is blowing. 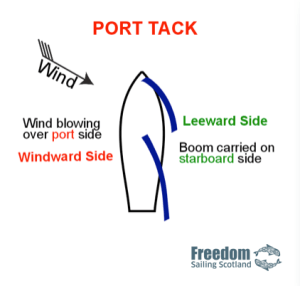 When sailing with wind coming over the port side of a sailing vessel it is said to be on a PORT TACK. When the starboard side is to windward it is on a STARBOARD TACK.

We can change which side the wind fills the sails by making a TACKING manoeuvre, where we turn the vessel and set the sails on the opposite side of the yacht. 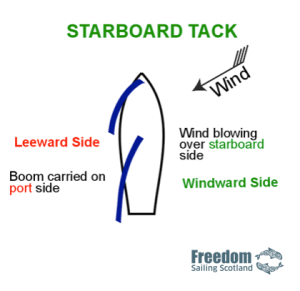 Regulations exist to help prevent vessel collisions at sea and in later chapters we identify the difference between STARBOARD and PORT TACK yachts in a potential collision situation and describe the rules in more depth.