How a sail and keel works

In the golden age of sail, large square riggers struggled to sail towards the wind and mostly sailed or were blown downwind by the trade-winds. Sail and rig design has evolved considerably and designers now have a better understanding of aerodynamics with associated developments in how modern yachts and sails perform.

Lift from a wing aerofoil 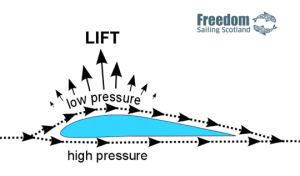 It might not be obvious at a casual glance but there are many similarities between the way sails and airplane wings work. Air moving along the curved outside of the wing-shape has further to travel than air on the underside. This faster air flow generates a low pressure area above the wing and provides lift. This lift gets an airplane airborne and is also responsible for providing a yacht’s sail with lift, producing forward drive. 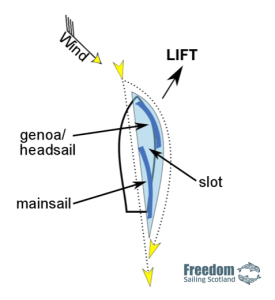 A yacht doesn’t have a wing like an airplane but if you had a bird’s eye view you would recognise that the sails form a wing-like structure with a gap between the genoa and mainsail known as ‘the slot’. 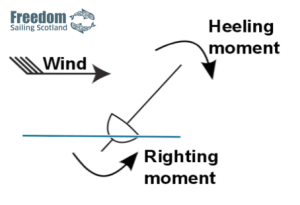 It may be a little disconcerting at first but completely normal for yachts to heel to some degree. The ‘heeling moment’ is the force generated by the wind which pushes the boat over. This force is counteracted by the ‘righting moment’ of the keel which has a tendency to bring the yacht into an upright position and reduce the heeling. As we will see in section below, there is a balance between the wind strength, our ‘point of sail’ and how much sail the yacht can carry. This all affects the heel you experience on a yacht. 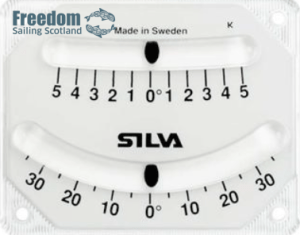 Experienced sailors become adept at controlling the angle of heel by balancing the amount of sail to suit prevailing conditions. Some yachts have a bulkhead mounted inclinometer and the common design works like a spirit level to give an indication of the heel of the vessel. 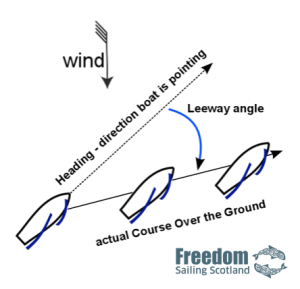 The keel has an important part to play in counteracting leeway. Leeway is a sideways movement of the yacht through the water. The keel protruding from the hull counteracts and resists the tendency for the yacht to slip through the water. As we will illustrate below, if the vessel is heeled over it tends to be affected more by leeway. When we are on a course that is subject to leeway we must consider it in our navigational calculations.

How does the keel work?

The importance of the keel is often overlooked but without it it would be impossible for modern yachts to perform the way they do. Sails provide the forward drive to a yacht but it is the keel that helps yachts sail towards the wind. 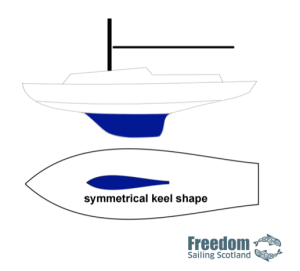 The keel provides a ‘righting moment’ to counteract the heeling force created by the wind. It also provides resistance and counteracts leeway or the sideways, movement of the yacht through the water. Importantly, the keel also functions a bit like a wing and produces ‘hydrodynamic lift’ that helps the yacht sail to windward.

Lift from the keel 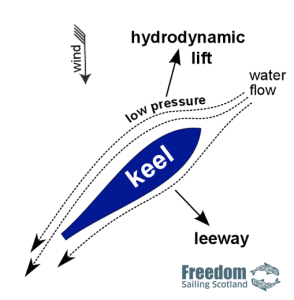 A keel generates lift in the same way as a sail or an airplane wing. The keel generates this lift as the vessel moves and water flows over the keel. It would be difficult for a modern yacht to sail to windward without the lift generating forces from the keel.

Unlike an airplane wing the keel has a symmetrical shape. As the keel moves through the water the slight sideways movement or leeway of the keel produces a differential flow of water around the keel shape generating an area of relatively low pressure and resultant lift. This lift helps the yacht sail close or towards the wind.

When a vessel is heeled over the keel is less upright in the water, inhibiting the amount of effective keel generated lift, limiting the upwind performance of the vessel. When a yacht heels uncomfortably there comes a point when all the lift generated by the keel is in the wrong plane and keel loses all performance and vessel is prone to considerable leeway.

Generally when sailing towards the wind we want to reduce heel as much as possible to maximize the lift generated by the keel. In practice, there is a trade-off between how much sail we can carry, the heel of the vessel, our pointing ability and the prevailing conditions. 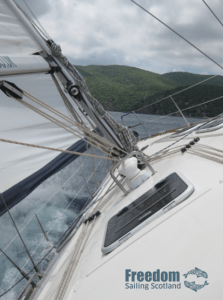 The sails provide the forward drive to the vessel but it is the keel that enables the vessel to sail towards where the wind is blowing from. As the vessel heels more the keel becomes less effective and leeway increases. Efficient upwind sailing involves balancing the amount of sail with the prevailing wind strength so that leeway is reduced while maximising boat speed and the lift generating forces of the keel. The close hauled vessel is subject to increasing amounts of leeway and heeled over to the point where the keel and rudder will stop producing lift. It may feel exhilarating and fast, but invariably is at the expense of the yachts course.

The keel is located at the bottom of the boat and usually protrudes from the main hull form.  Being out of sight, its importance to a sailing vessel is often overlooked. Keels are usually made from heavy materials as the increased weight lowers the yacht’s centre of gravity and provides a righting force. This counteracts the heel of the boat when the wind gusts and counteracts the vessel being pushed over producing a righting moment force. We have already looked at how the keel generates hydrodynamic life and enables modern yachts to sail close to the wind. In this section we will have a look at the variety of common keel designs found on cruising yachts. 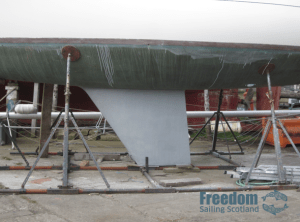 Fin-keeled boats can sail close to the wind and tend to point quite high. They tend to be very manoeuvrable due to the ratio of keel length compared to yacht length. The keel’s downside is its tendency to have a greater draft increasing the amount of boat below the waterline and bit more tricky to get into shallow anchorages. As a general rule, the deeper the keel  the higher the vessel will be able to point into the wind. The design is usually found on performance racing/cruising vessels. 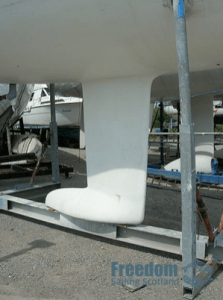 We can reduce the depth of the keel and the draft of the vessel by placing a bulb on the bottom of the keel. This lowers the centre of gravity by adding weight low down. This kind of keel is very popular in charter vessels. Reducing the draft or length of the keel affects the pointing ability of the yacht. However reducing the vessel draft lets sailors explore shallower areas than compared to fin keels of the same weight. 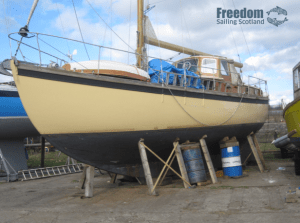 Long Keel yachts make excellent sea boats and are very stable in rough conditions. They have a lot of weight low down, reducing their centre of gravity. However, some designs tend to be difficult to handle at slow speeds in tight marinas with compromised ability to point into the wind. 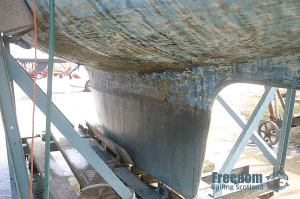 A Long Fin Keel works quite like a Bulb Keel except the weight is distributed fore and aft instead of being placed in the bulb. The downside with this kind of keel is that the vessel tends to turn a little slower and harder to handle in tight situations. However it can make a very sturdy keel design and is used on many long distance, steel cruising yachts. 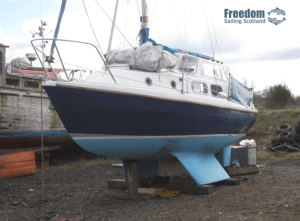 The advantages of this type of keel is its shallow draft which comes into its own in estuarine environments where it can access shallow water. The design’s major drawback is its poor pointing performance and cannot compete with a Fin Keel boat’s for pointing ability.