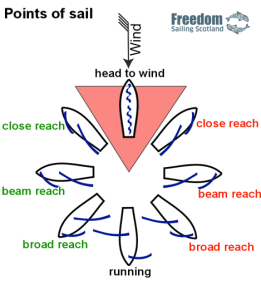 The ‘point of sail’ describes the direction the yacht is pointing with respect to the wind direction. Unfortunately it is not possible to sail directly into the wind and when we point the bow of the yacht directly into the wind, we are said to be ‘head to wind’. In this position the sails would start flapping and luff. The red triangle represents a no go area where it is not possible to sail. It is often impossible to properly control the yacht when the sails are providing no drive. If we have the yacht pointing head-to-wind the vessel will lose speed and steerage.

Most modern yachts can sail around 40 degrees from the wind in the close reach position. The sails would be trimmed in tight to the centerline of the yacht. By trimming the sails tightly we may be able to sail a little higher into the wind and are said to be close hauled to the wind. However, if we try and sail closer to the wind we risk ‘pinching’ where we start slowing down, heeling with increasing leeway and risk the sails luffing.

Bearing away and hardening up 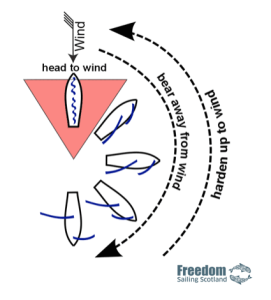 As we bear away from the wind further and ease the sails we get pushed by the wind more, like a square rigger and the lift component generated by sail shape become less important. Depending on yacht design the beam and broad reach points are the fastest point of sail. This is because we get both the push from the wind, and lift generated by the sails driving the boat forward.

If we bear away form the wind even further we move into the ‘dead run’ position. We have virtually no drive from lift generated forces, instead it is mostly wind pushing and blowing on the sail that provides the forward drive.

Racing and performance boats can sail 30 degrees off-the-wind whereas cruisers can only sail close-hauled at about 40-45 degrees. If we try to sail to close to the wind we start to ‘pinch’ at the wind and lose performance. When this happens the sails do not function properly; speed is reduced and ‘leeway’ increases. 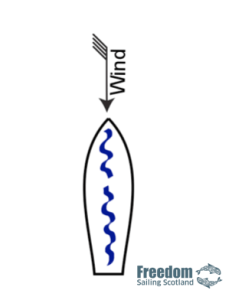 When the wind is blowing from dead ahead over the bow, the sails start flogging, the vessel loses speed and its forward momentum. In this position it is impossible for the sails to harness the energy form the wind and provide forward drive. When we go about and tack from one side to another we have the boat speed to put the bow of the yacht through the eye of the wind and momentarily go through the head-to-wind position.

When we want to hoist or lower the mainsail we can do so more easily by easing the pressure on the sail by going head-to-wind which has the effect of making the mainsail flog and luff. 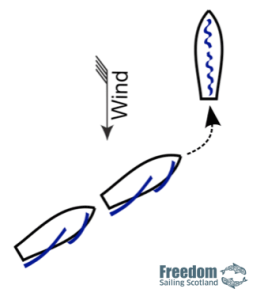 Other times when we are carrying too much sail, In gusty conditions or heeled over too much. the yacht can be ‘rounded up’ into the head to wind position where the sails flog. The vessel becomes over powered, loses any response to the helm and turns into the wind. It may be a bit noisy with sails flogging hard but rounding up tends to de-power the effective wind in the sails and yacht can be brought back under control.

However, the flogging sails reduces a sail’s life span and flailing sheets and ropes can cause injury. It’s good practice to limit the amount of time or occasions when sails are allowed to flog – “A flappy sail is not a happy sail”.

When we sail around 45° off-the-wind the vessel is in the close reach position. In this position most of the vessel’s forward drive is produced by the lift generating forces of the sails. The vessel is susceptible to heeling and loses its pointing ability as it heels gradually losing grip as the keel slips sideways through the water increasing leeway. In the close reach position the sails are tightened in close to the centerline of the vessel but can sail slightly closer to the wind in the close hauled position, where we haul the sails in even tighter to the centreline of the yacht. The yacht is said to be balanced when the sails are trimmed to produce optimum forward drive with a minimum amount of heel and leeway. As the vessel heels over and/or its experiences a gust of wind it is always trying to round-up into the head-to-wind position. To stop this ‘weather helm’ the helmsman must exert a constant pressure on the wheel or tiller to keep the yacht traveling on a straight course. As we bear away onto other points of sail, the weather-helm becomes less obvious and critical to the yachts performance.

We can sail a little higher and closer to the wind than a close reach – this is called close hauled position and very much like the close reach position but a little tighter to the wind. Close Hauled gets its name from the fact that we have all the sails hauled in and tightly trimmed to the yacht’s centerline. Pointing and the how close a yacht can sail to the wind depends on yacht design and to large extend on the keel. The pointing ability also depends on how well sails are set and the crew ability to control and helm the vessel.

When we are close hauled, virtually all the forward drive of the vessel is being produced by the lift generated from the sails. We are in effect gliding the yacht as close to the wind as possible whilst avoiding stalling our wing or sails. We need to keep the yacht moving and water flowing over the keel or we destroy its ability to generate usable lift.

When we are sailing in a close reach or close hauled position the yacht is very susceptible to heeling and it is our interest to reduce this as much as possible. Minimising heel helps reduce the adverse effects of leeway which in turn affects our course and where we are heading. When we trim the sails to the centreline of the vessel, we actually flatten them out, and move the draught of the sails forward. This has the effect of producing a low profile wing shape which can help keep the vessel more upright, reduce the amount of heeling and keep us on course. 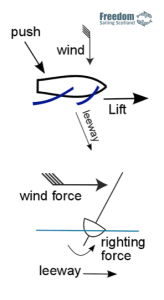 The beam reach point of sail is when we have the wind coming over the beam or at 90° to the yacht. From the close reach position we bear away from the wind and ease the sails slightly. In this point of sail we increase the amount of wind pushing the vessel while maintaining some lift generated from the sails.

When we bear away on to the beam reach the heeling forces acting on the vessel are reduced, which in turn reduces the leeway. When we keep the yacht more upright in the water, we spill less wind from the sails which helps us drive the yacht faster. The heeling forces are less than in the close reach position in.

Leeway becomes much less important as we bear away from the wind from a close reach to a beam reach position and the vessel is driven from a combination of the lift generating forces of our sails and the fact we are getting pushed more by the wind. 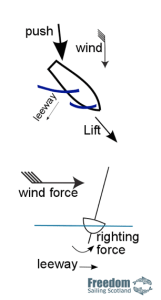 When we bear away further from the wind, easing the sails more and steer around 120 degrees off the wind, we are on a Broad Reach point-of-sail. On some yachts a broad reach, is the fastest Point of Sail as you get a lot of push from the wind and also maintain some lift generating forces.

On a Broad Reach the sideways and heeling forces acting on a yacht are greatly reduced and the vessel can remain more upright making it a very comfortable, point of sail.

As we bear away from the wind to a broad reach the amount of apparent wind we experience on the boat can change drastically. We will have a closer look at True and Apparent wind in a later section.

As we bear away, or free-up we let the wind get behind the sails more. On a dead run we are getting pushed along by the wind much like a traditional square rigger and would and have the sails set in a goose-winged configuration.

As we bear away, turning away from the wind, we drastically reduce the sideways forces on the vessel. On a dead run we have virtually no leeway affecting the vessel. Sailing on a dead run can be an exhausting process requiring considerable concentration to stop the mainsail accidentally gybing or swinging dangerously from side to side.

It is interesting to note that the dead run is a slower point of sail then the broad reach point-of-sail as we have destroyed any benefit from the lift generating effect of the sail to drive the yacht.

The relative air pressure developing on the front of the sails is what actually slows the yacht down and can cause the yacht to oscillate from side to side making it a potentially dangerous point of sail.

Unfortunately the wind never seems to be blowing in the direction we want to go and we always have to allow for that when drawing up our passage plans. Luckily we have manoeuvres to help us reach our destination. If heading towards an upwind destination we Tack into the wind but if working our way downwind and need to change direction and use a Gybing manoeuvre. 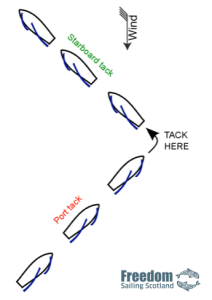 As already explained, yachts cannot sail directly into the wind and a sailing boat must sail a zigzag course to reach an upwind destination which entails turning the bow through the eye-of-the-wind.

As discussed earlier we can be on a port or starboard tack dependent on how the wind hits the sails. Tacking manoeuvres are usually performed when we are working our way into the wind and we change direction so as to get the wind on the other side of the sails. During the tacking manoeuvre the speed of the vessel carries it through the head to wind position. 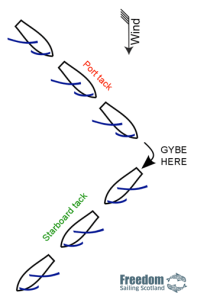 When working towards a downwind destination we could run dead with the wind in a goose-winged manner. However as we have mentioned earlier running dead with the wind can be the slowest point of sail and requires a lot of concentration making it hazardous in heavy seas or strong winds.

It is much better to zigzag and broad reach downwind and turn the stern of the yacht through the eye-of-the-wind although a certain degree of skill is required when executing a gybe in heavy winds. It is vital to prevent the mainsail and boom swinging uncontrollably across the cockpit area where it can be very dangerous.

Gybes must always be controlled manoeuvres and caution is always required when making them. Boom preventers can be rigged up to prevent the boom swinging uncontrollably and help prevent an accidental gybe. 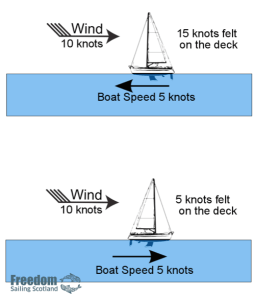 The best way to differentiate between true and apparent wind is to imagine you’re out cycling and stopped at traffic lights and feel the breeze blowing against the side of your face – this is the true wind.

But when you start pedaling forwards you feel a stronger wind hitting the front of your face – this is the apparent wind which is a combination of the wind generated by your cycling and the true wind blowing in the area which isn’t dependent on your movement or direction.

When we are running with the wind, the apparent wind speed will feel considerably less than the true wind speed, and may need to shorten sail (reef) before we turn and head into the wind.