Knots, hitches and bends are used to join roped or make things fast and should stay secure under load and be easy to undo when the time comes. In a panic anyone can probably tie a knot that appears to do the job but you must ask yourself:

There are thousands of knots and many ways to tie the same knots but it’s a fundamental part of seamanship that you can tie knots smartly and under a little bit of pressure. The skill might even save your life one day. I have listed some of the more common knots used on sailing vessels and when they should be used. It is also good practice for every member of the crew to use the same knot for the same job as it makes a lot easier to untie them. 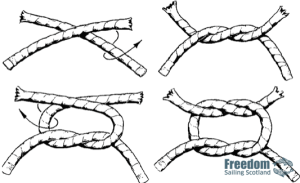 The reef knot is an ancient and simple binding knot used for securing two ropes of equal diameter around an object. It is often used incorrectly to tie two pieces of rope together but is not recommended due to the instability of the knot.

As the name implies it’s a good knot for reefing and tidying up loose sails after reefing, However, avoid tying anything under strain as it can collapse and slip under pressure. When properly tied the knot lies flat and can be used to tie bandages to lessen irritation against a wound.

The weaver’s knot or sheetbend as its commonly known is useful for joining ropes of unequal diameters. The double sheetbend can give the knot more security or be used when there is a large disparity in the thickness of the ropes.

This knot is useful but should never be substituted for the bowline if life depends upon it as it can undo itself when not under tension. If the knot is put under strain, you sometimes have to cut the knot out of the rope. 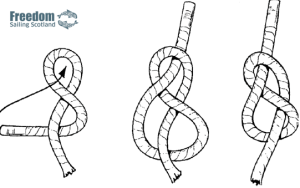 The figure of eight is commonly used as a stopper knot and used to prevent the bitter end of sheets running through blocks. You should always be in the habit of tying stopper knots in the end of sheets to prevent them falling overboard, fouling the propeller or losing your sheets to the wind. It a good idea when tiring this knot to leave a tail on the line so that you can pull on the bitter end of it becomes stuck in a block. 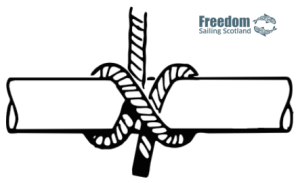 The clove hitch has lots of applications on a yacht where it’s most commonly used to tie-off fenders on guardrails. However, it can undo itself quite quickly and I’ve lost a few fenders with this hitch.

I would advise using a clove hitch when berthing, adjusting the fenders as necessary and finishing the knot off with a half hitch or using a round turn and two half hitches for the job. 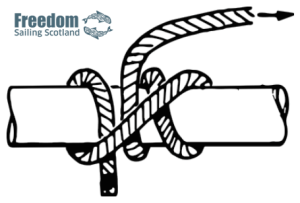 The rolling hitch is a purchase knot and when tied properly will be able to pull against another rope. This is particularly useful when you have a riding turn around a winch and the sheets are jammed up.

The secret is to tie the knot with a smaller diameter of the sheet being pulled and to pull the knot in the direction of the double turns. This knot can also be used to take tension and support stays in emergency situations.

Round turn and two half hitches

The round turn and two half hitches is a very useful and widely used knot which can be used to tie a line to just about anything. The great thing about this knot that it can be both tied and untied when there’s a load on the line.

It’s the line to use on the shore to tie-off a long line as it allows the lines to be adjusted from both ends. It’s perfect for when someone throws a line at you and you need to make a turn around a cleat to ‘take the weight’ and then tie-off with a hitch.

The two half hitches actually make a clove hitch but can also form a bull hitch and both are perfectly acceptable. 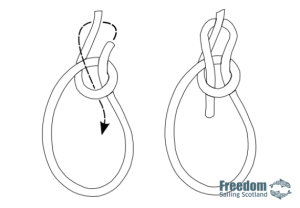 The bowline is the ‘King of Knots’ and probably the most important commonly used sailing knot.  The bowline forms a loop and can be used to lay over a bollard or tie to a ring on the wall. Two bowlines can even be used to bend and tie two ropes together.

The knot is very difficult to untie when under load and useful shoreside when tying your vessel up so no one can tamper with your warps. The knot does not slip and if used properly can make a rescue sling in an emergency situation. 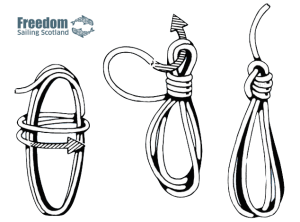 Ropes should be coiled in large loops preventing any figure of eight type loops developing by putting a small twist in the rope as you lay each loop. As you approach the bitter end and the last metre of rope, make a few turns around the top of the coiled loops, then pull a bight through the eye at the top of the loops and finally pull it over the top to lock-off the coil.

If everyone on the vessel coils a rope the same way it is less likely to uncoil in the locker and therefore can be used smartly when needed.

Securing a line to a cleat

This should hold most warps under strain but can be finished off with a locking turn. It’s extremely bad practice to lay locking turns on top of each other as they can become extremely difficult to undo after they have been under tension.

Securing a coiled rope to a cleat

This is usually done after hoisting the mainsail or any other halyard and it’s important to do it correctly so it can be undone and the sail lowered quickly if need be.

In this part of the module we will be looking at the qualities and uses of different types of rope and then get to tying some knots. Being able to tie all the common knots should become second nature. When you need to use a knot you often need to tie it smartly (quickly in a seamanlike manner).

Chandlers carry a large assortment of warps, ropes, twines and string suitable for a diverse range of marine tasks such as anchoring, mooring, operating halyards, sheets and for safety equipment. To simplify matters I’ve separated ropes into the different materials used in their construction and the suitability each has for different boating uses.

Modern rope is virtually all constructed from synthetic fibres, which offer greater strength, more durable and resistant to rot than this made from natural fibres like hemp.

This type of construction is what you will recognise as the traditional three strand rope. The strands of hawser laid rope are twittered together to give a right hand lay and means that they must be coiled in a clockwise way to prevent kinks forming. The lay of the rope also affects how you can splice the rope.

The core of this rope has an outer sheath that gives it a smooth touch. It comes in a variety of colours so you can easily discriminate the line on a boat.  It is a very common type of rope to find on a yacht and used for sheets, halyards, reefing lines etc.

Multiplait is formed by many strands and very useful for heavier loads like mooring and anchor lines. The construction method makes it resistant to kinking and can be also be easily spliced like hawser laid rope. 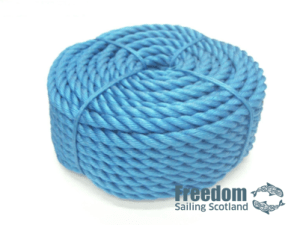 Nylon is a polymer filament that can be stretched up to 40% before it parts. The stretch makes it unsuitable for using in halyards and sheets as their tendency to stretch under load would require their constant readjustment.

However nylon ropes come into their own for anchoring and mooring warps as their stretch helps prevent snatching. When moored or berthed in marinas or harbours the elasticity in the rope makes for a more peaceful sleep and takes some of the strain from the fairleads and cleats. Nylon does not float. 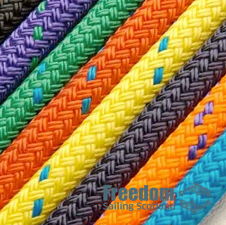 This rope comes pre-stretched making it very useful for halyards and sheets and the braided construction makes it very comfortable to handle. It’s not very good for use as mooring warp because of its inelasticity and snatches quite heavily.  Polyester does not float. 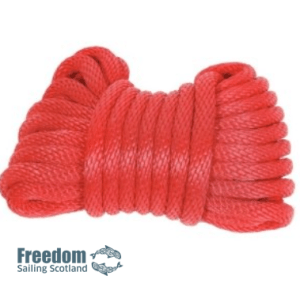 This is extremely light and can have a rough texture and inexpensive rope. It floats on the water surface and usually coloured blue or orange. The orange variety is very useful for onboard safety equipment as it floats and the colour is highly visible in an emergency situation.

Polypropylene is not as strong as nylon and polyester and tend to break down quicker with UV light. It can be used as an alternative to Nylon for some applications but will need to use a heavier weight to achieve the same strength. Due to its floating ability it should not be used for anchor lines. 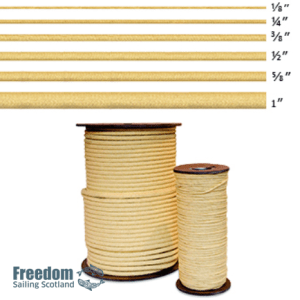 Kevlar is relatively expensive but super strong. It is meant to be as strong as single strand steel of the same diameter but lighter. Kevlar polymers weaken where the material takes a turn through a block or bends where knotted although it’s still used widely on high performance racing yachts where weight is at a premium.

Kevlar is sometimes weaved into other ropes to strengthen the top and is now commonly found woven into performance sails.