If we read the information under the chart title we are told that all depths on the charts are measured in metres from a level called Chart Datum (Fig 2.4).

You can think of Chart Datum (CD), as a hypothetical sea level that is near the Lowest Astronomical Tide (LAT), the most extreme low tide we get. We measure all depths from a level that is near the most extreme low tide we can possibly get. However, on rare occasions the sea level can go below Chart Datum. We will examine these low tide levels further in the course. At the moment we can assume that Chart Datum and Lowest Astronomical Tide are the same level, i.e. the lowest the tide gets to when the water goes out.

There are numbers all over the sea area of the charts. Most of them correspond to ‘spot’ depths. These are places where the depth has actually been measured. Fig 2.8 ‘Arrow B’ shows a spot depth of 3.1 metres. Remember these depths are measured from Chart Datum (CD) and under normal circumstances the depth will never be less than 3.1 metres at that point. 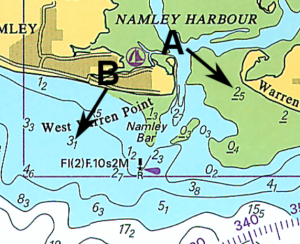 In fact there should always be more than this depth of water here due to the tidal level. If the sea level measures 2.2 metres above CD, we would have a depth of 5.3m at this position. If the tide was out and we only had 0.4 metres tidal level there would be 3.5m of water above this point. So the depth of water at any given place will be the depth shown on the chart (charted depth) and the height of tide at that particular moment of time. Under normal conditions it is reasonable for us to assume that this spot depth is the least amount of water we could expect at this position at any given time and would usually expect more due to the height of tide.

Fig 2.8 ‘Arrow A’ shows what we call a drying height and is measured at 2.5 metres. The line under the number, and placement on green printed areas represent intertidal / drying ground, and tells us that this number corresponds to a drying height. Put another way, if the sea level was at the chart datum this position would be 2.5 metres above water level. If the sea level was 3.2 metres above chart datum, there would be 0.7 metres of water above this position. If the tide went out and only had 0.4 metres of tide above chart datum there would be 2.1 metres of land poking above the sea level at this position. Drying Heights have small lines drawn under the printed numbers and are usually written on green areas indicate to us that this is a measurement of a height of this particular spot above chart datum. All our drying height areas are areas that will be covered by the highest tides and represent the intertidal zone.

Depth contours indicate lines of equal depth. Points of equal depth are joined up to make a contour line and depending on the scale of the chart are at arbitrary depths. Fig 2.9 ‘Arrow A’ indicates the 30, 20, 10, 5 and 2 metres depth contour lines. On RYA TC3 the blue areas of the chart indicate depths ranging from 0 to 10 metres and the white areas represent water deeper than 10 metres. If you look at RYA TC4 you will see that the ranges of depth that the white and blue printed colours represent changes with the scale of chart. 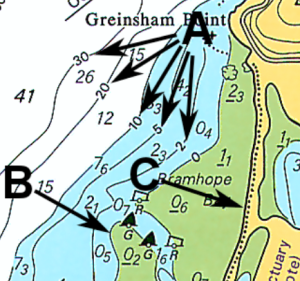 The 0 metre depth contour ‘Arrow B’ is represented by the line at the edge of the green coloured ‘drying area’. This is the level of our Chart Datum and is normally bounded by a green area on modern Admiralty Charts. This 0 metre depth contour or chart datum is the lowest level that the tide is ever expected to reach, near the lowest astronomical tide level and is a level that we use as a base-line for lots of tidal measurements.

These contours enable us to better visualise and get a feel for the structure and form of the sea bed. They also help reduce the clutter there would be if there was only spot depths. It is important to remember that the ranges of depth that the colour represent may change with the scale of the chart, however the edge of the green contour should always represent chart datum. Also note that there may be spot depths bounded by the contour lines.

The buff yellow colour represents the land on Admiralty Chart and seaward edge of which corresponds to the Mean High Water Spring (MHWS) tide level. This is the level which is reached of the highest average spring tide. We have two levels of where under extreme circumstances the tide recedes, Chart Datum (CD) and Lowest Astronomical Tide (LAT). We also have two measures of where the highest tide that comes in reaches, Mean High Water Springs (MHWS) and the Highest Astronomical Tide (HAT) level which again are subtly different and will be discussed later.

So when you are looking at a chart, the colour and contour lines makes it easier for us to visualise and get an idea of the topography of the seabed. When you study a chart, you should be doing exactly that, building up a picture of what the seabed looks like, and noting any features that might be important to us navigating about on the surface of the water.