It is essential that a navigator knows the position of the vessel when at sea and is able to read this position and plot it on charts. All maps and charts have a a reference system to pinpoint position. We can determine every point on the earth’s surface and express this position using a two coordinate system – latitude and longitude. For this system to work it must be common to all users, as it is no good communicating our position to someone else if they are not using the same system. Most maps and charts in use today have a grid system that is used to define position on the earth’s surface and have adopted the universally accepted system of grid lines called latitude and longitude.

The earth rotates around a geographical axis that is in line with the North and South Poles. The equator is exactly half way between the poles and at right angles to the rotational axis. The axis formed by the rotation of the earth (north and south poles) and the equator provides us with an excellent starting and reference (datum) point for building our grid system. 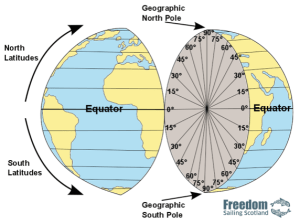 The equator is an imaginary line that is equidistant from the North and South poles and divides the earth into the northern and southern hemispheres (Fig 2.43). It therefore is a convenient starting point to measure lines of latitude from. A parallel of latitude is another line of latitude than is drawn parallel either north or south of the equator. The equator forms the largest line of circumference or ring of latitude you can measure around the earth, and is called a great circle, all other parallels of latitude will be smaller and funnily enough are called ‘small circles’.

The latitude of a place is the angular measurement between the equator and the parallel of latitude at that place. The angle is measured at the centre of the earth and expressed in degrees, minutes and seconds from 0º to 90º north or south of the equator. The equator is at 0º latitude, the geographical North Pole is at 90º N. The UK lies around 55ºN. The tropic of Cancer and Capricorn and the Arctic and Antarctic circles, like the equator, are named parallels of latitude.

A degree of latitude on the earth’s surface is a relatively large distance and we need to subdivide it to gain more accuracy. 1 degree is subdivided into 60’ minutes of arc. When we work with latitude and longitude we use sexagesimal notation instead of decimal notation. This may be a little confusing at first but becomes easier to work with. For even greater accuracy each minute or arc is divided further into seconds but can be a little cumbersome to use and depending on the scale we are using switch back to tenths of a minute. Confused, Don’t be. All should become clear when we work-up some examples. The basic points you should remember are:

We use the word ‘arc’ to express an angular measurement, and when we use minutes and seconds it has nothing to do with time, instead, its the nomenclature we use to break degrees into smaller units. 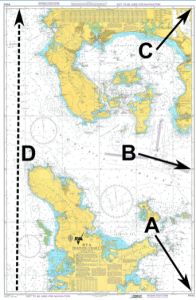 Plotting a position on the latitude scale 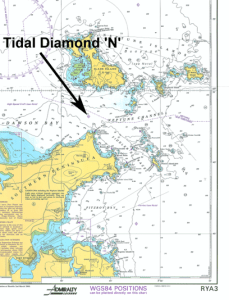 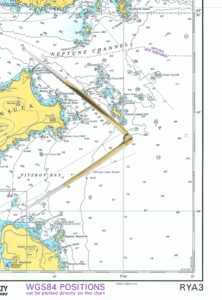 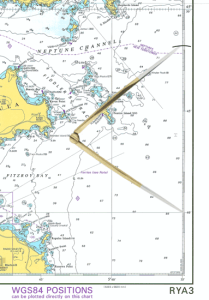 Without further adjustment to the dividers we can then transfer this distance to the latitude scale, keeping one point on the 45°40’N Parallel, and mark the the position on the scale with the pencil (FIg 2.47)

When we read a latitude scale in the northern hemisphere is is always good practice to start from the southern end of the chart and work northwards (Fig 2.48). As you may notice, the number of degrees north is not always written on the scale and may have to scan the whole latitude scale to get an idea of how many whole degrees north of the equator we are. In this case we are working around 45° NORTH.

The black and white bars on the scale help us identify individual minutes of latitude. Each minute of latitude is further divided into 5 smaller subdivisions representing 0.2’ or 2/10ths of a minute.

We can now read off the position of our pencil mark and see that it is 3’ north of the 45°45‘ North scale mark and one further subdivision representing 0.2’

The latitude of Tidal Diamond ‘N’ is therefore in a position 45°48’.20N of the equator (properly pronounced on a VHF radio as, “four five degrees four eight point two zero minutes north).