You can use latitude and longitude to describe the position of a charted object, you can also use a bearing and distance to find a position on the chart. In this section we will be looking at how to use bearings and the plotter and how to calculate distance using the dividers. 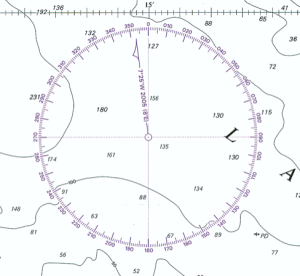 Magenta coloured Compass roses are placed around the chart in different areas. The one in Fig 2.56 is located on the middle of RYA Chart 3 just west of Cape Woodward, Northern Territories. You can see that the compass rose is a simple protractor with 000° pointing to true geographic north, and is lined up with the meridians of longitude.
There is also an arrowed line pointing form the centre of the compass rose towards 353° true north. This line is actually pointing towards the Magnetic north pole. So by looking at this compass rose we can see where the Magnetic north is in relation to True North and how much it varies. The writing along the arrow tells us that in 2005 the Magnetic North Pole was 7°25’W of the True north pole and that it is estimated to be moving at 8’E per year.

We will be examining variation and the differences between True and Magnetic North in a later section but we should note that when we are ever talking about or writing down a bearing we must indicate whether it is in relation to True or Magnetic north. In some places in the world the difference between the two is considerable and it is possible to make massive navigational or accumulative errors.

Cardinal points of a compass

To avoid any misunderstanding a compass is just another name for a protractor. It doesn’t necessarily have to be a magnetic compass, just a graduated scale drawn in a circle and marked off in degrees. 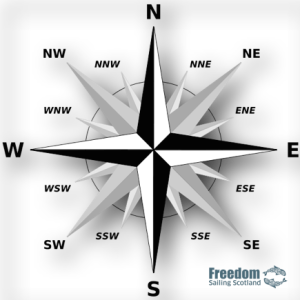 We know that a circle is divided into 360°. The compass goes up to 360° and has three digits, so where there is less than three digits we fill in the spaces with zeros. This is the convention for writing bearings, and we also follow the number off by writing down whether it is a Magnetic (M), True (T) or Compass bearing (C).

The cardinal points of a compass are the main North, South, East and West (Fig 2.57). In navigation we have what we call Cardinal Buoys that get their name from the points of the compass and will have a closer look at them in a later module on buoyage.

We can use cardinal based direction when we express a general direction. Most of the time when we looking for accuracy we would use a bearing. We mostly describe the wind direction in having a cardinal direction. For instance if we have a Southwesterly wind, it means that the wind is coming from the southwest and blowing towards the centre of the compass rose. It may, however be blowing and pushing our boat to the Northwest, but better described as a bearing…. Our boat is drifting with the wind on a bearing of 045°T. Wind is always described about where it is coming from, however tidal stream, current or our direction is always described about where we are heading or what bearing we are on. 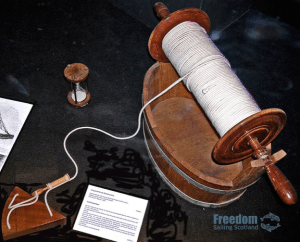 Before electronics, sailing ships used to measure their speed though the water by means of a wooden board on the length of a long bit of string. This line was then allowed to run from the back of the moving vessel, over a period of time as measured on an hour glass. When the allotted time ran out and glass was empty the rope was firmly grasped and knots counted…the speed of the boat through the water was measured in knots (Fig 2.63) 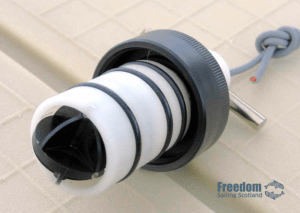 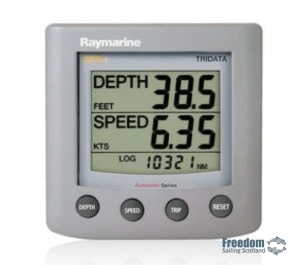