We use these projections to represent the oblate spherical surface of the earth on a flat piece of paper like a chart. If we were to try and flatten a spherical globe surface and make it flat, it would buckle and rip, making it useless for practical navigation (fig 2.25). 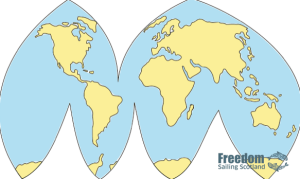 The Belgium cartographer Gerardus Mercator came up with the technique of using a cylindrical map projection.

A Mercator projection is made by placing a bulb at the centre of the earth and projecting the earth’s surface onto the inside surface of a tube of card rolled around the earth. By doing this we construct a flat map where lines of latitude intersect lines of longitude at 90 degrees (Fig 2.26) 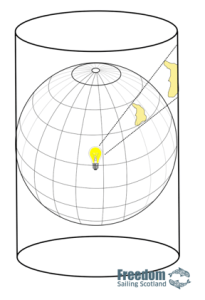 However as you move towards the polar regions the map becomes more distorted and stretched. This is why when you look at an old school map of the world, Antarctica, Greenland, Alaska, Siberia look massive compared to other continents and countries. So as we travel further north and south, past the 70 degree latitudes, Mercator Projections become unstable, distorted and unusable as navigational charts. 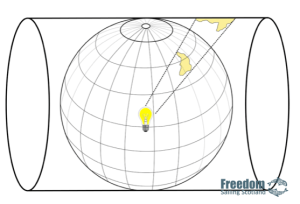 We can solve this problem, if we are cruising around the high latitudes by using a Transverse Mercator Projection where we roll the cardboard tube up with the openings facing west and east. With this Transverse projection we would have accurate information above the polar region but conversely would have distortion and unstable pictorial information for the equatorial regions (Fig 2.27). 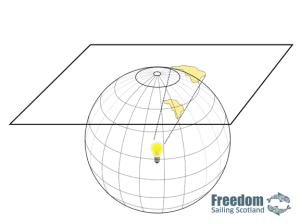 To solve the problems of distortion, charts representing polar regions can use the ‘Gnomonic Projection, that better represents these extreme latitude regions (Fig 2.28). The meridians of latitude must converge at the poles and parallels of latitude must form concentric rings as areas of equal latitude as you near the poles (Fig 2.29). 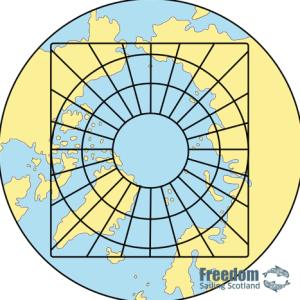 These gnomonic charts are used for planning oceanic voyages where we work up ‘Great Circle’ courses. Assuming the earth is indeed a perfect sphere we can see that the equator is a great circle, every line of longitude is also a great circle, they go all the way around the longest circumference with a common centre point in the middle of the earth. . 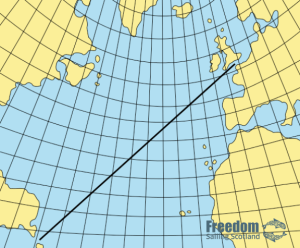 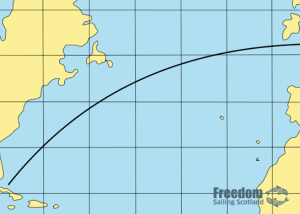