Why are there standard and secondary ports?

As a flood tide floods inshore it can be though of as a huge wave moving relatively slowly (Fig 5.51). As the tide floods northwards along the Farlow Channel the high-water will arrive first at Farlow ‘A’, then Rampton ‘B’, then Whale Bay ‘C’ as it floods and works it way northwards. Eventually reaching the inner recesses of Namely Harbour ‘D’ and esturine harbour of Emsbourne ‘E’. As the tide ebbs and flows in the opposite direction we will experience low tide at Namely harbour first then Whale bay, Port Rampton and Farlow.

The geomorphology of the seabed and land around where the tides flood and ebb have a huge influence on the times and rate of the tide and combine to produce the difference in tidal heights and times of the tides.

Fig 5.52 shows a typical secondary port information box. The name and exact position of the secondary port are prominent ‘A’ at the top of the box. The Standard Port, in this case Namely Harbour is usually highlighted in bold ‘B’. In most almanacs there is a little printed arrow indicating which direction you should look in the book to find the Standard Port tide tables and information quickly. We can see from the secondary port information that when the High Wide is 0000 UT or 1200 UT that the High Water at the secondary port, Port Rampton, will be 35 minutes before the standard port, Namely Harbour ‘C’. When the Mean High Water Spring levels are a 4.0 metres the MHWS level at Port Rampton will be 0.5 metres higher. Other differences are indicated in the box, including the different times of High Water and time differences at Low Water. There are also height differences depending on whether it is Low Water Springs or during Neap Tides.

There may be times when we are experiencing mid tides or or the times of the tides are not exactly as printed in the secondary port information box. In this case we must extrapolate the differences. We shall have a quick look below how to do this but not part of the Day Skipper theory course.

We can see form the secondary port information that

High-water gets to Farlow River first and is between between 40 and 18 mins earlier than namely harbour ‘A’.
High-water at Port Rampton is 35 to 16 mins before HW at Namely harbour ‘B’.
High water at Whale Bay is between 10 and 5 mins before HW ay Namely Harbour.
High-water at Emsbourne is 10 mins after High-water at Namley Harbour.
Fig 5.53 makes it is a bit easier to visualize the highwater progressing northwards towards the standard port at Namely Habour, then proceeding up the estuary to Emsbourne. If we want to know the time of high or low water at a secondary port we can consult the secondary port information boxes and apply them to the standard port tide tables and curves. The resulting adjusted times and heights can then be used directly on the ‘borrowed’ curve of the standard port to find tidal heights and times for its secondary ports.

We now need to apply the differences to calculate the times and heights of tide at Port Rampton.

The proforma graphs are used for interpolation to avoid mental arithmetic. If you make mistake it is easier to see the error using a graphical approach and less likely to make significant mistakes.

Secondary ports are defined by the RYA as a Yachtmaster level skill and for Day Skipper level you are only required to have an awareness of secondary ports and the differences involved.

It is important to note the differences are given in 24 hour notation, so 0110 is one hour and ten minutes and not 110 minutes.

We can use a proforma to help calculate the time and height of tides at secondary ports. The converted times and heights can then be used directly on the tidal curves for the standard ports. Remember, whenever we are working with tide tables, tidal curves and secondary ports differences etc need to work in UT and not in Daylight Saving TIme. 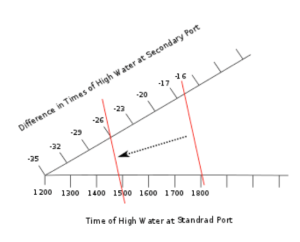 If we want to determine the high water time on the afternoon of the 19th March at Port Rampton we look at the tide tables for Namely Harbour and see that the high tide in afternoon there is at 1452 UT. 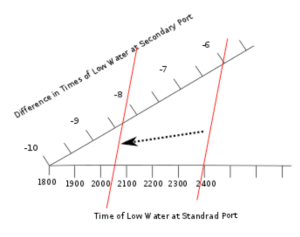 The Low Water we are looking for 2031 UT so we have to interpolate between the 1800 UT and 0000 UT secondary port differences and should be somewhere between 6 and 10 minutes before Low Water at Namely Harbour. 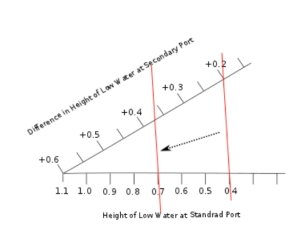 However, the height of High Water we are looking for on the 19th March is 3.7 metres and therefore must interpolate to find the difference at Port Rampton.

The height of tide at Namely Harbour is 3.7 metres which is a mid range tide, with a high water level between springs and neaps and must therefore interpolate between the MHWS +0.5 and MHWN +0.6 differences

For the 19th March tide table LW of 0.7 metres at Namely harbour we can see that it is a mid range Low Water and must interpolate between the MLWS +0.2 and MLWN +0.6 differences.