How many times have you listened to the weather forecast only to find that the weather you experienced wasn’t quite what the forecast led you to expect?

Sea area forecasts cover a huge area (e.g. sea area “Wight” extends all the way across the Channel to France), and it is to be expected that passing weather systems will affect different parts of such a large area differently. It isn’t that the forecast was wrong, probably just that it was too general for your needs. Add to that the possibility that a depression slowed down, speeded up, changed direction, became more or even less active as it approached you  and you might consider it all is a bit of a lottery!

This section is intended to help you look at a synoptic chart and help you understand whatever forecasts you have available before making a decision about going to sea.

We don’t spend much time considering high pressure systems in the RYA syllabus other than saying wind travels from its centre, in the northern hemisphere spiraling outward in a clockwise direction crossing the isobars at about 20° to them. This is because they usually mean fine settled weather and seldom mean much in the way of wind which in turn means a calmer sea state. The problems associated with high pressure are more about getting a sail boat to move in the lighter airs than being overcome by adverse weather.

A closer you at a North Atlantic depression

During this section we’ll look at weather associated with different parts of an Atlantic depression and how to recognise which part is involved. To do this we’ll consider the meteorological “signs and symptoms” to be experienced at each of the boat positions from A to F as seen in Fig 12.28 and relating these positions to specific weather patterns. 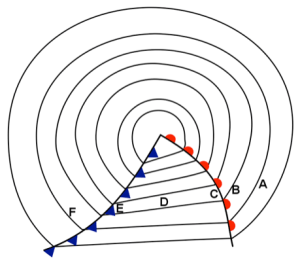 In the northern hemisphere, wind travels towards the centre of a depression, spiral inward in an anti-clockwise direction and crossing the isobars at about 20°.

The distance from position A to the warm front is approximately 200 nautical miles, so if a depression is moving “steadily” at 15–25 knots and in a direction parallel with the isobars in its warm sector, there is possibly an eight hour warning for the skipper. This is a generalisation, since the depression could be moving faster and the distance from the high wispy ice-clouds to the warm front itself could be less or more than 200 miles. 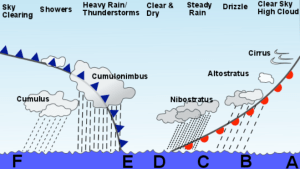 At the warm front

At the warm front, the less dense moist warm air “climbs” over the drier and colder more dense air ahead of it (Fig 12.29).  Remember that the distance from position A to the warm front is approximately 200 nautical miles. 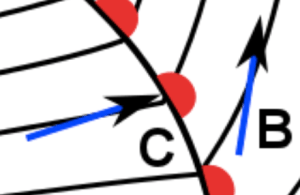 Rain starts and gets heavier as the warm front gets closer. Under the warm front, at position C shown by the sailboat, the rain will be heavy and is likely to reduce visibility for a time due to the taller nimbostratus cloud present.

On one side of the warm front at position C, the wind is almost southerly but on the other side it has moved in a clockwise direction and therefore “veered” to become south westerly.

Warm air holds more moisture than cold air so in the “warm sector” there will be low cloud (stratus) probably with fine drizzle that appears to be fog. The visibility is likely to be at its poorest in the warm sector of a depression and for an extended period.

With the depression usually moving parallel with the isobars in its warm sector and roughly the same direction as the winds, you are unlikely to cross many isobars so the barometer will become steady, as will the wind strength and direction.

At the cold front

At position E you are at the cold front which can be 50 nautical miles across. The darker and more turbulent looking cloud probably with obvious heavy rain underneath, heralds the approaching cold front and provides a warning to shorten sail for the skipper who is aware of the messages in the clouds. The height of the cumulonimbus cloud probably won’t be discernible from the warm sector while still under the blanket of stratus cloud. 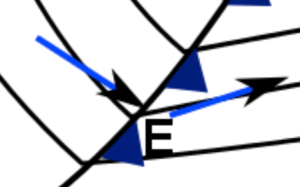 Thunder and lightning is another indicator of an imminent cold front squall!

You can see that at the cold front there will be a sudden veer as the wind direction changes from WSW before the cold front to NW immediately following it. It is this sudden change of wind direction that adds confused seas to the other difficulties to be handled at this time. When the waves are from a single direction, a fairly predictable rhythm is established. The seas are confused because there is no stable direction of waves due to the WSW wind driven waves now mixing with NW wind driven waves, unpredictable and choppy is one way to describe it!

At the cold front, cold air (indicated by the blue) is denser than warm air. When cold air tries to “overtake” warm air it therefore has to “punch” its way underneath. The result is that the murky, drizzly, foggy stratus conditions of the warm sector give way to towering cumulonimbus at the cold front.

As we know, cumulonimbus is very tall cloud extending from the lowest levels right up to the top of the troposphere. When it can’t grow any higher it spreads sideways and forms its characteristic “anvil” shape. Cumuloform cloud has vertical movement of air making it unstable and cumulonimbus is the tallest and most unstable of them all! The weather under cumulonimbus is very squally with high suddenly veering winds, confused seas, heavy rain and possibly thunder and lightning.

After the cold front

Moving from position E towards position F involves crossing isobars again, this time away from the centre of the depression, so there will be a rising pressure which can be observed on your barometer. 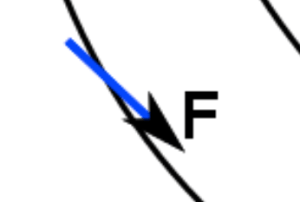 Following the cold front is clearer cold air and a weather situation characterised by the weather forecast phraseology “clearing for a time (perhaps one or two hours) followed by isolated/scattered showers”.

The distinctive signs of the approach of a warm front can be seen from a long way off giving the opportunity to monitor and avoid if required.